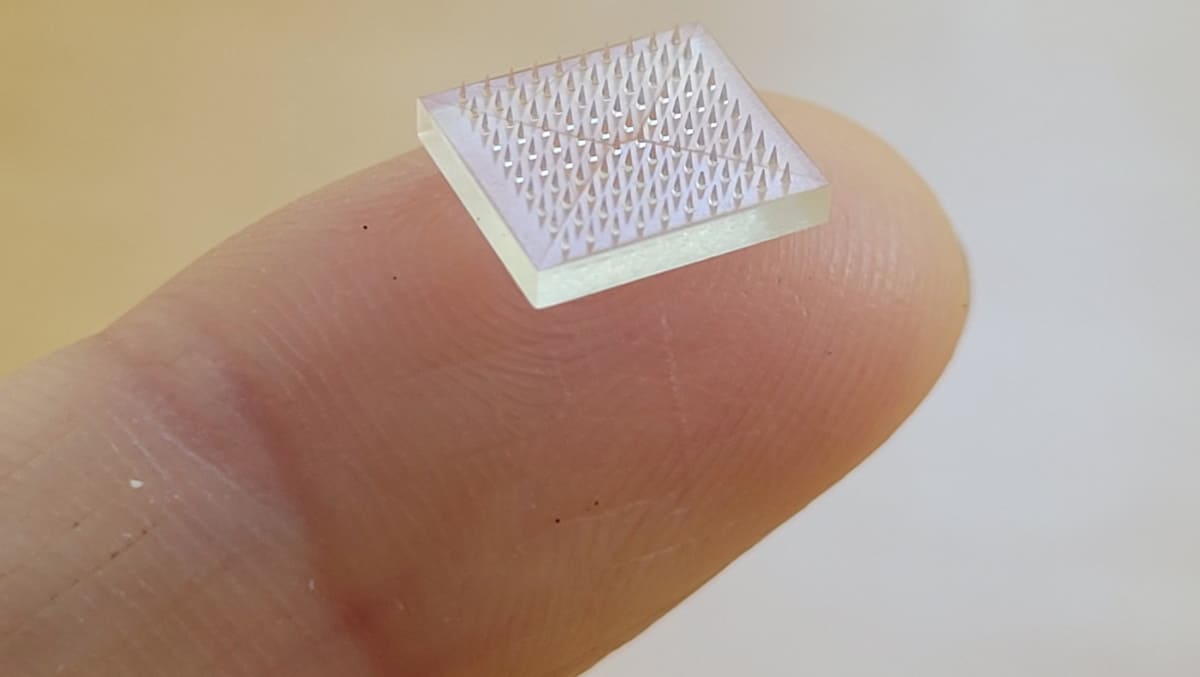 Could the future of vaccines be syringe-free?

Vaccine delivery: The 3D-printed patch designed by researchers in the US contains 100 microneedles. (Courtesy: Shaomin Tian)

In the global fight against COVID-19, around 6.8 billion vaccine doses have been administered across the world, a figure that is likely to rise as more doses become available and with many countries now recommending booster jabs. As often in times of health crises, new medical technologies have emerged, driven by the sense of urgency and extra funding, that address difficulties of existing methods and could change healthcare paradigms for years to come.

During the COVID-19 crisis, we have witnessed the rise to prominence of messenger-RNA vaccines, which trigger immune reaction by directly teaching cells to produce subunit antigens, rather than by introducing weakened forms of the virus. This design makes them easier to design and manufacture than traditional vaccines.

But the pandemic also highlighted logistic and delivery hurdles. Indeed, many supply chain and delivery challenges have hindered mass vaccination against COVID-19, particularly in resource-limited countries: vaccines need to be stored in freezers, both during shipping and at delivery sites, and injected by trained healthcare professionals. This usually requires a visit to a clinic or a hospital, while those who fear needles may be offput by the traditional syringe-based vaccine delivery. To address these challenges, two independent teams from the US and China set out to create patches composed of multiple microneedles, each smaller than a millimetre high, that can deliver vaccines into the skin. This technique can result in more antigen-presenting cells (the vaccine’s targets) than achieved via muscular injection. The teams report their findings in two separate articles, where they also highlight the technology’s potential for boosting immunity while reducing the volume of compound administered.

In a study described in PNAS, researchers from the University of North Carolina and Stanford University in the US, led by Shaomin Tian and Joseph DeSimone, took advantage of continuous liquid interface production (CLIP) 3D printing to create vaccine patches with microneedles of different sizes and shapes. CLIP functions by triggering a photochemical reaction at the interface of a liquid resin, curing the resin into a solid state. It relies on a tuneable light sequence that meticulously manages the light–resin interaction.

Until now, 3D-printed patches could not offer such a high level of customization, resulting in bed-of-nails-like patches created through moulds. Repeated use of the moulds over time decreased the sharpness of the microneedles created, which eventually limited the vaccine efficiency.

“Our approach allows us to directly 3D print the microneedles, which gives us lots of design latitude for making the best microneedles from a performance and cost point-of-view,” Tian says.

The needle design chosen by the team is shaped like a fir tree, which increases its surface area and cargo loading (36% greater loading than a conventional pyramidal design). When compared with traditional subcutaneous injection, patches containing a common model antigen (ovalbumin) and the immunostimulator CpG induced an immune response 20 times higher after prime immunization, and 50 times higher after booster injection in mice.

The team of immunologists and chemical/biomedical engineers are continuing to innovate by formulating RNA vaccines, such as the Pfizer and Moderna COVID-19 vaccines, into microneedle patches for future testing.

No need for cold storage

In China, a team led by Guangjun Nie and Hai Wang from the National Center for Nanoscience and Technology and Hui Li from Dongfang Hospital in Beijing focused less on the needle design but specifically tackled the SARS-CoV-2 virus, in a study published in ACS Nano.

The researchers designed a patch composed of 100 biodegradable microneedles, each less than one tenth the diameter of a bee’s stinger, mounted on top of a polyvinyl acetate backing layer and a layer of PNIPAM-B, a thermally responsive polymer. To release the needles’ cargo, it is important to separate the backing layer and leave the needles inside the epidermis.

The PNIPAM-B layer enables this release through an interesting property: it is hydrophobic at room temperature but becomes hydrophilic when its temperature falls below 14–16 °C. Using this property, the backing layer of the patch can be easily separated from skin by lowering the skin temperature through washing it for three minutes, leaving the microneedles in the skin.

The team tested the patch on mice, using a vaccine based on DNA sequences (which is more stable than an mRNA vaccine) encoding either the SARS-CoV-2 spike protein or nucleocapsid protein to the surface of non-toxic nanoparticles. The researchers observed a strong and potent adaptive immunity, both with freshly prepared patches and patches stored for two weeks at room temperature.

Could the future of vaccines be syringe-free?