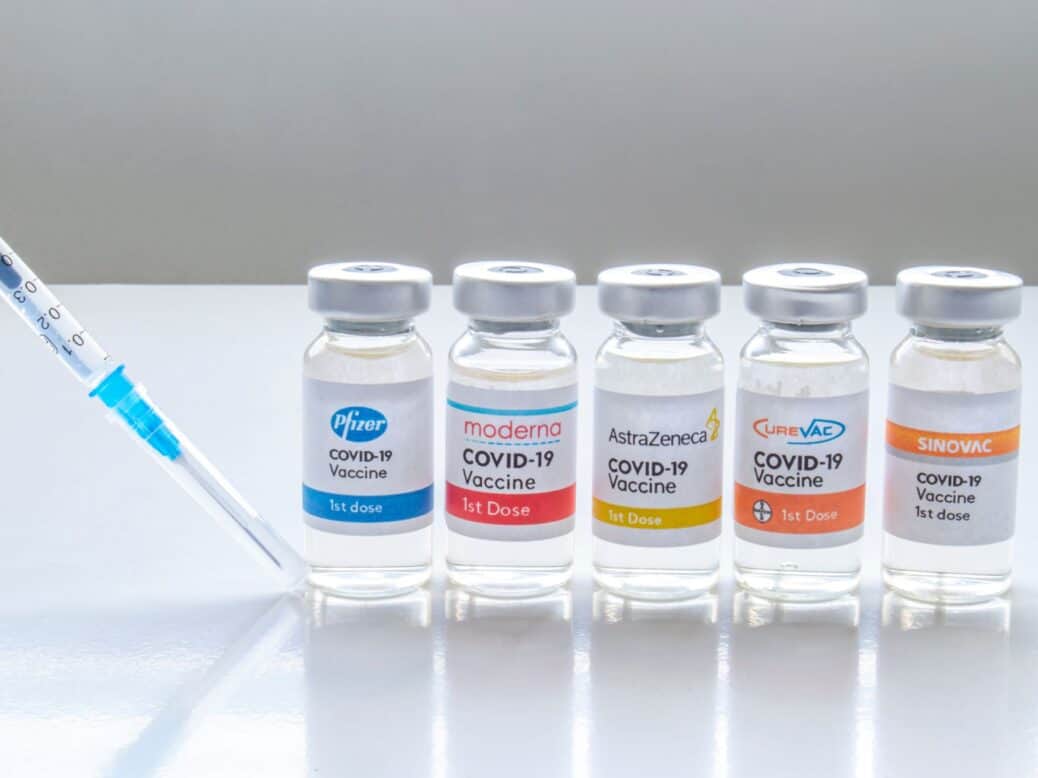 Combining two different COVID-19 vaccines provides protection on par with that of mRNA vaccines — including protection against the Delta variant.

A health-care worker in Nonthaburi, Thailand, examines a vial of the Pfizer–BioNTech COVID-19 vaccine.Credit: Peerapon Boonyakiat/SOPA Images/LightRocket via Getty

Study after study has shown that people who receive two different COVID-19 vaccines generate potent immune responses, with side effects no worse than those caused by standard regimens.

But now, for the first time, researchers have shown that such ‘mix and match’ regimens are highly effective at preventing COVID-19 — roughly matching or even exceeding the performance of mRNA vaccines.

The high antibody levels and other strong immune responses elicited by mix-and-match regimens suggested they would offer good protection against disease. Still, “I was delighted to see that it’s as effective as one would expect,” says immunologist Martina Sester at Saarland University in Homburg, Germany. “This is really good news and this will certainly have influence on clinical practice.”

“These emerging effectiveness data support the use of these approved COVID-19 vaccines in either the standard or mixed schedules,” adds Matthew Snape, a vaccinologist at the University of Oxford, UK.

The studies sprang out of a natural experiment that began in March, when a number of countries partially or completely halted the use of the vaccine developed by the University of Oxford and the pharmaceutical company AstraZeneca in Cambridge, UK, because of extremely rare but serious side effects. This meant that some people who’d already received one dose of this vaccine then had a different vaccine as their second jab. Sester’s team and several others demonstrated that these mix-and-match combinations were safe and led to a strong immune response1,2,3.

Now, three teams have provided the first measurements of the effectiveness of mix-and-match regimens. The studies looked at various populations at various times — including during the rise of the hyper-infectious Delta variant — but they all agree that mix-and-match, or heterologous, vaccination is highly protective.

One took took place in Sweden, where the health authorities severely curtailed the use of the Oxford–AstraZeneca vaccine, which relies on a weakened chimpanzee cold virus. As a result, more than 100,000 people in Sweden received a dose of AstraZeneca, followed by an mRNA-based jab — either the vaccine from Moderna in Cambridge, Massachusetts, or the one developed by pharmaceutical company Pfizer, based in New York City, and biotechnology firm BioNTech in Mainz, Germany.

Epidemiologist Peter Nordström at Umeå University in Sweden and his co-authors analysed data in the country’s national health registers, which contain vaccination and COVID-19 testing and treatment information for all residents. They found that compared with unvaccinated people, those on a mixed vaccination schedule were 68% less likely to develop a symptomatic infection, whereas the 430,000 people who received two doses of AstraZeneca were 50% less likely to do so4. These and other figures make it clear that the heterologous regimens are more effective than two doses of AstraZeneca, Nordström says.

The conclusion echoes that of a similar analysis5 in Denmark, which has national health and vaccination registries similar to Sweden’s. Denmark halted all use of the AstraZeneca vaccine in April. Epidemiologist Mie Agermose Gram, at the State Serum Institute in Copenhagen, and co-authors found that one dose of AstraZeneca followed by one dose of Pfizer–BioNTech was 88% effective at preventing SARS-CoV-2 infection — an effectiveness similar to that of two doses of Pfizer. Their study has not yet been peer reviewed.

No need for brand loyalty

One study found that mix-and-match regimens could be more effective than two doses of an mRNA vaccine. Immunologist Thierry Walzer, at Inserm and the University of Lyon in France, and his co-authors analysed data from 2,512 health-care workers who received a combination of AstraZeneca and Pfizer vaccines, and more than 10,000 who received two doses of the latter. The team showed that SARS-CoV-2 infection rates in the mix-and-match group were half that of the group that received two doses of Pfizer6.

Mix-and-match COVID-19 vaccines might have passed the effectiveness test, but questions remain, such as how well the mix-and-match vaccines will hold up over time, and whether and when they need boosting with extra doses, says Nordström. In unpublished data, his team has found that the durability of the protection conferred by mixed vaccinations is comparable with that of mRNA vaccines. But the data also hint that higher-risk individuals would benefit from a third dose.

Knowing that mix-and-match vaccines are highly effective will have global implications, says Sester. There is some evidence that immunosuppressed individuals mount a strong immune response to mixed regimens7, so it’s possible that mixing doses could protect organ-transplant recipients and others with weakened immune systems better than do the standard regimens. The data could also support mixed immunization programmes in lower-income countries, where there might be shortages of certain vaccines. “These data are really important towards policies,” she says.