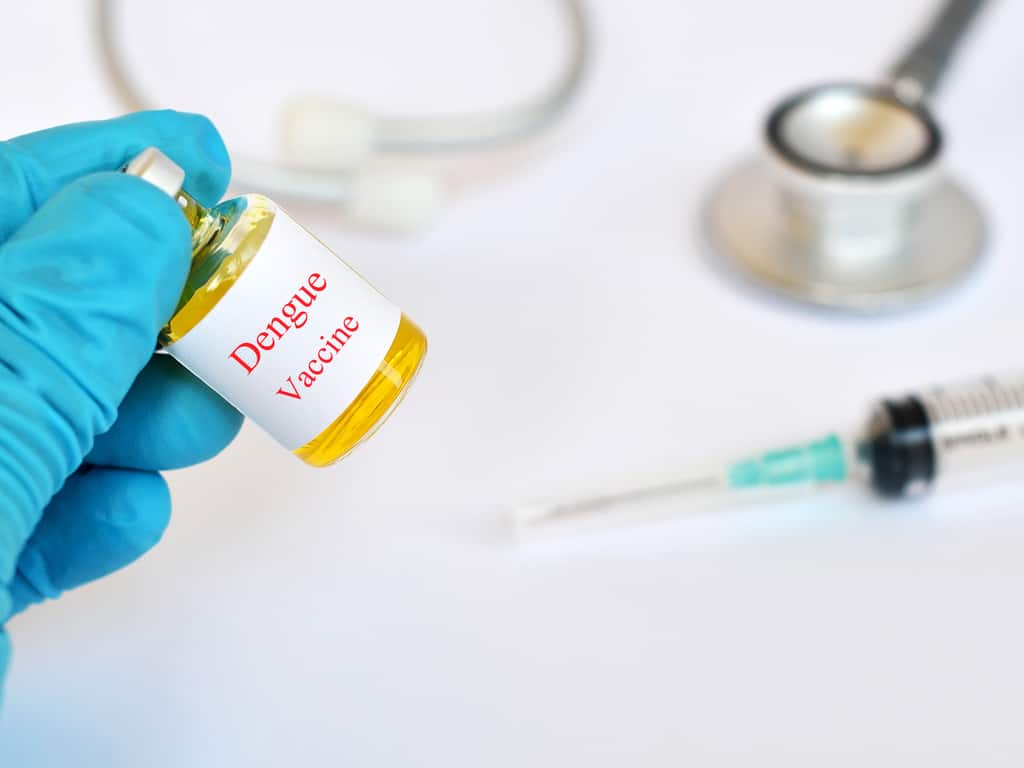 Dengue is caused by 4 closely related viruses (DENV-1–4) and is a growing public health concern, with an expanding range of areas with climate conditions conducive to the mosquito vector. In 2019, more than 3 million dengue cases were reported from countries in South, Central, and North America, which was the highest number on record. From 2010 to 2020, dengue outbreaks in endemic US territories such as Puerto Rico, US Virgin Islands, and American Samoa involved more than 30 000 reported cases, about half of which occurred among children aged 0 through 19 years. Among the 30 000 cases, there were 68 fatalities, 6 of which occurred among children.1

Given the importance of dengue as the most common arboviral disease globally, the potential for dengue as an etiology of fever in the returning traveler, the possibility of local transmission in areas in the US with the Aedes species mosquito vector, and the risk for large outbreaks in endemic US territories and associated states, clinicians should be familiar with new and effective prevention tools. This Viewpoint summarizes the new recommendations of the Advisory Committee on Immunization Practices (ACIP) for use of the dengue vaccine (Dengvaxia) in the US.2 The vaccine is the first vaccine licensed by the US Food and Drug Administration (FDA) to prevent dengue.

Dengue can affect people of all ages, although children and adolescents 10 through 19 years old are at highest risk for severe disease and hospitalization in endemic areas. This occurs because primary and secondary dengue infections are associated with a higher risk for poor outcomes than subsequent dengue infections, and in endemic areas most people have 2 or more dengue infections before adulthood. Dengue represents an important disease both in areas with current endemic transmission, as well as areas with several species of Aedes mosquitoes at risk for disease introduction.

With limited effective and scalable methods of control of the main mosquito vector for dengue, Aedes aegypti, transmission remains largely unabated. Because no specific antiviral therapies exist for treatment, appropriate clinical management through supportive care is the mainstay for reducing morbidity and mortality. To meet the growing challenge of dengue prevention and control, manufacturers and public-private consortia have worked for years on the development of a pediatric dengue vaccine. A generally accepted criterion for dengue vaccines is efficacy against all 4 dengue viruses, which stems from the increased risk for severe dengue associated with a second dengue infection occurring months to years after the initial infection. This increased risk is related to antibody-dependent enhancement, in which low antibody levels are ineffective at neutralizing the virus but instead facilitate entrance into cells and increase viral load, leading to plasma leakage and clinically significant extravascular fluid accumulation.

During 2011-2018, a tetravalent dengue vaccine from Sanofi Pasteur was evaluated in randomized clinical trials conducted in Asia and Latin America that involved approximately 30 000 children 2 to 16 years old. Early findings reported in 2015 showed efficacy for preventing virologically confirmed dengue of 67% among children 9 years and older, with absolute incidence rates of 2.1% vs 6.1% among those who received the vaccine vs controls, respectively, and reduced efficacy (45%) among younger children aged 2 to 8 years (absolute rates of confirmed dengue of 5.5% in vaccine recipients vs 9.8% in controls).3

Based on those findings, the vaccine was approved by more than 20 regulatory agencies globally for people aged 9 years and older and was introduced in the Philippines, shortly after licensure there in 2016, among schoolchildren aged 9 to 10 years.4 However, following vaccination of about 800 000 children aged 9 to 10 years, the Philippines suspended the dengue vaccine program in 2017 when additional case-cohort analyses from clinical trials found that children without previous dengue virus infection had increased risk for hospitalization (cumulative incidence of 15.7 vs 10.9 per 1000 for seronegative vaccinated children and controls, respectively) and severe dengue (cumulative incidence of 4.0 vs 1.7 per 1000, respectively) after vaccination.5 Although the vaccination period was short-lived (approximately 1 year), the Philippines experienced a public outcry against the dengue vaccine and a substantial increase in hesitancy for all childhood vaccines.6 The World Health Organization updated recommendations for this dengue vaccine in 2018 to include prevaccination screening and emphasized recommended vaccination for children with serologic evidence of previous infection instead of vaccination of all children in highly endemic areas, as had occurred in the Philippines. Read more…